Go on a hike through an original Japanese satoyama landscape

Hokusetsu Satoyama Area
Kurokawa is said to be Japan’s No. 1 satoyama, which was selected as one of Japan’s best 100 villages, where a grove of sawtooth oak trees called “daiba-kunugi,” which has still been left for the continued production of high-quality charcoal called “kiku-zumi,” and mountains with patchwork patterns created with these oak trees in autumn can be seen. In this area, bright and rich seasonal landscapes are spread out, such as Kurokawa Dahlia-en, which has approximately 1,200 dahlia roots.

Kawanishi City Kurokawa Elementary School (currently closed) is an elegant wooden school building constructed in 1904. Currently, the building is used as the Kurokawa Community Center, and is also available for study tours. 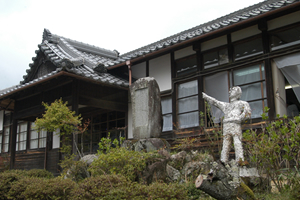 In the Kurokawa district, where the beautiful satoyama landscape is spread out, many Edo Higan cherry trees blossom from late March to early April. Edo Higan is an endangered wild species. Along the hiking course, visitors can view the “Smiling Cherry Tree,” a tree estimated to be 150 years old. 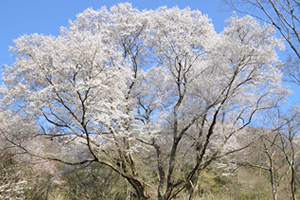 Approximately 1,200 roots of dahlias blossom as if to compete with each other.

An approximately 5-minute ride on a cable car from Kurokawa Station of the Myoken no Mori Cable (Myoken’s forest cable car) takes visitors to Myoken’s forest, which is surrounded by rich nature. Visitors can also enjoy a barbecue at an open space while enjoying forest bathing. 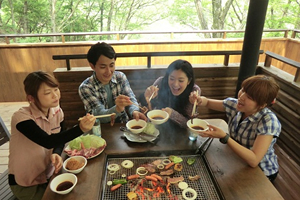 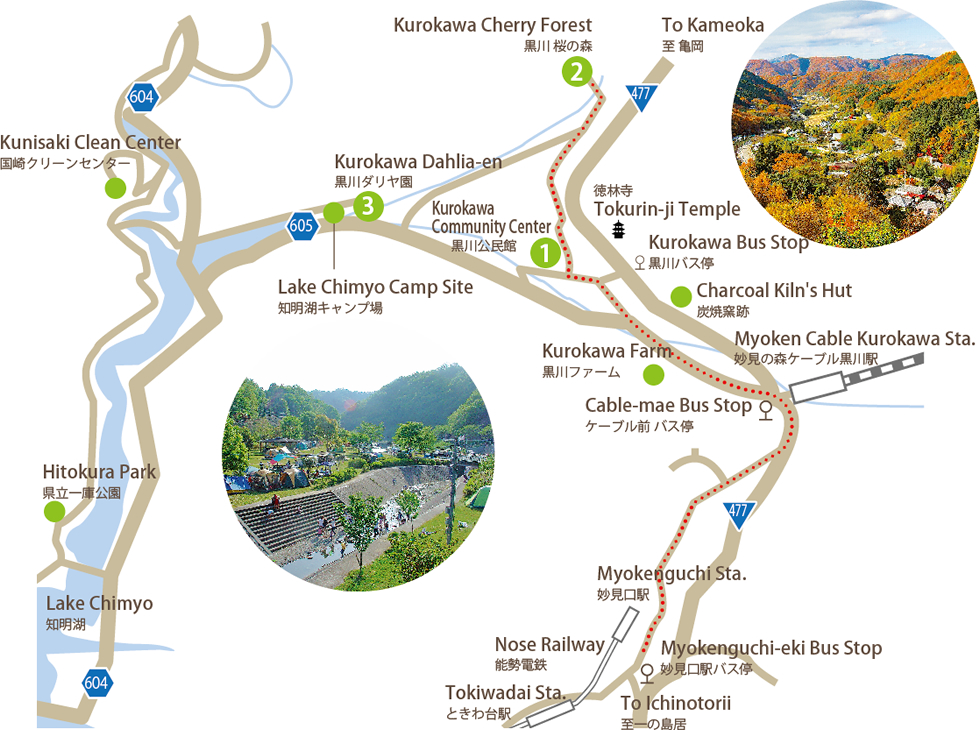 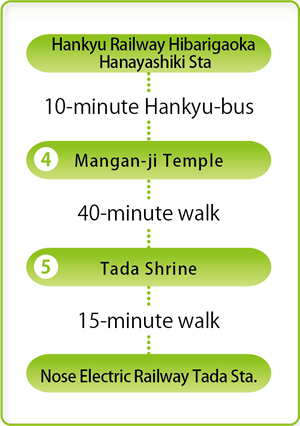 Tour around temples and shrines related to the Genji at the birthplace of the Seiwa Genji.

The birthplace of the Seiwa Genji, Kawanishi
Tsunemoto, who was a grandson of the 56th Emperor Seiwa, was granted the family name of “Genji.” Since Tsunemoto’s son, Mitsunaka, moved to Tada basin with his clan in 968, created a group of strong warriors, and formed the foundation of the Genji Clan and samurai society, this place has been handed down as the birthplace of the Seiwa Genji to this day. With the appearance of many busho (military commanders) who have formed Japan’s history, such as the descendants of Mitsunaka and Minamoto no Yoritomo, Kawanishi is considered the hometown of the Seiwa Genji.

On both sides of the Sanmon gate (temple gate), two statues of Kongorikishi, which were relocated from Tada Shrine at the time of the issuance of the Ordinance Distinguishing Shinto and Buddhism during the Meiji period, stand high. Furthermore, the temple is also well-known for its Buddhist statues from the Heian period, such as the statue of the thousand-armed Kannon; Kujunoto (nine-storied pagoda), a nationally designated Important Cultural Property; and the grave of Sakata Kintoki (childhood name: Kintaro), one of four generals who served Minamoto no Yorimitsu. 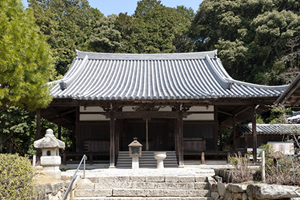 In 970, Minamoto no Mitsunaka built Tada-in, the predecessor of Tada Shrine. The current shrine was a structure rebuilt by the 4th Shogun Ietsuna. The area around this shrine, which is enveloped in a sacred atmosphere, was designated as a National Historic Site, and there are many nationally or prefectually designated cultural properties, such as the Main Building (honden) and Worship Hall (haiden). Five genrals, including Minamoto no Mitsunaka, Yorimitsu, Yorinobu, Yoriyoshi, amd Yoshiie, are worshiped at this shrine. In early April every year, the “Kawanishi City Genji Festival” is held in the area around Tada Shrine. 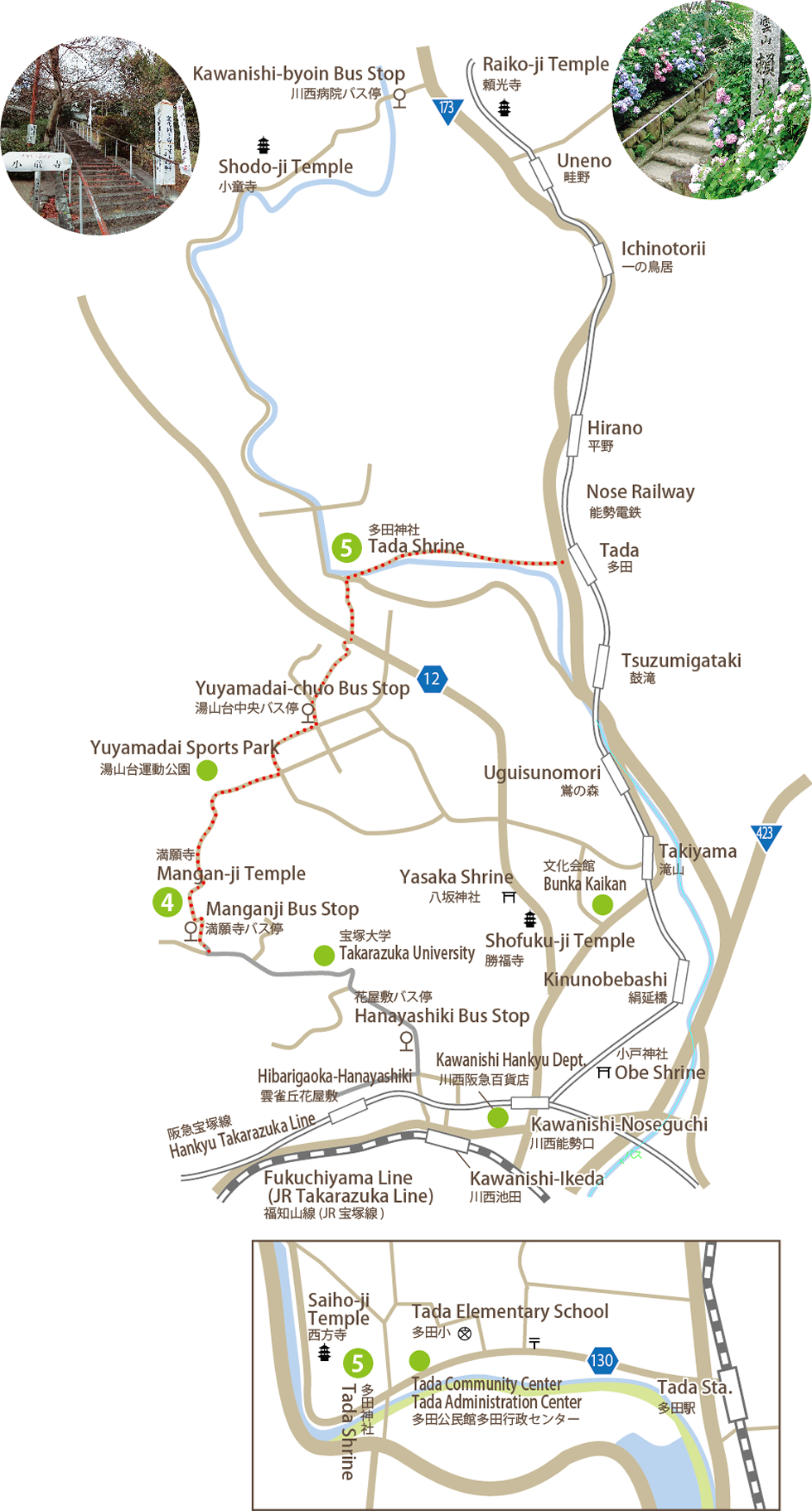