Walking Through Takarazuka: A World of Fine Art and Anime

Located in southeastern Hyogo Prefecture, home to the Takarazuka Grand Theater, The Osamu Tezuka Manga Museum, and Hana no Michi (Flower Road) among other attractions, Takarazuka is a city filled with art.
Based here since its beginning in 1914, with both male and female roles played by women, the all-female Takarazuka Revue has launched dazzling musical productions, winning a multitude of fans both at home and abroad. The city is dotted throughout with Western style decorations reminiscent of those appearing in the Revue’s musicals. 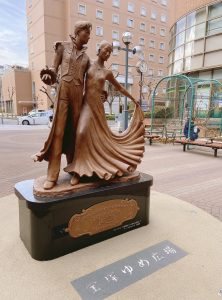 The elegance appearance of the dancing couple charms us all!

Be sure to check the Takarazuka Sightseeing Promenade Map before venturing out, written in Japanese and several other languages as well. ●Takarazuka Grand Theater
Opened in 1993, this is the reconstruction of the original Takarazuka Revue exclusive theater. With 2,550 seats, the state-of-the-art lighting and live orchestra create a dramatic space for the performances. 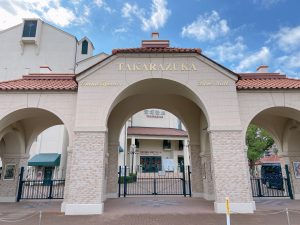 For more information about the Takarazuka Grand Theater: https://visithanshin.jp/en/spot/612/ 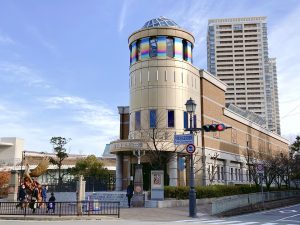 Osamu Tezuka, the manga artist who created the world-famous animated character Astro Boy, spent his youth at Takarazuka. At the Osamu Tezuka Manga Museum opened in 1994, various items related to the artist as well as some of his production materials are exhibited, and visitors can even experience making their own anime. In addition, an original movie is screened here which can be seen nowhere else. The library offers the complete works of this creator, around 2,000 volumes available for your reading pleasure available in English, Chinese, Korean and other foreign languages. 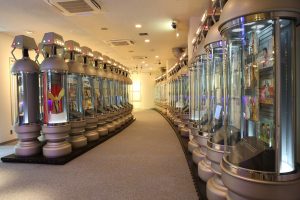 In front of The Osamu Tezuka Manga Museum stands a bronze statue of one of his character creations, the Phoenix. The vividly colored creature seems to flap its wings, full of life. Underfoot in front of the museum are inlaid the handprints and footprints of Tezuka’s characters. Due to measures to prevent the spread of coronavirus infection, some entrance restrictions and partial exhibition restrictions may occur. Please confirm before visiting.

●Hana no Michi (Flower Road)
Connecting Hankyu Takarazuka Station and the Takarazuka Grand Theater is a roughly 400m walking path. Including cherry blossoms, flowers for every season have been planted along its length. Along the path is the shopping plaza Hana no Michi Cerca, with cafes, restaurants, interior goods shops and a Takarazuka Theater souvenir shop. 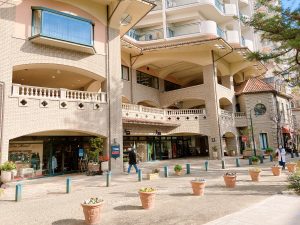 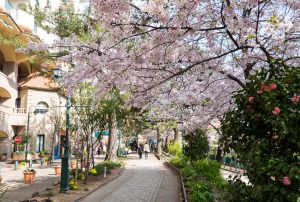 In the center stands the brightly painted, stylish Hana Butai (Flower Stage) pedestrian bridge. The view from atop the bridge is also beautiful. 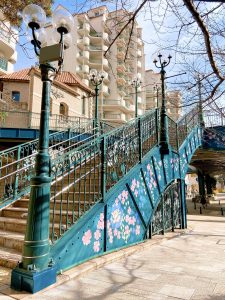 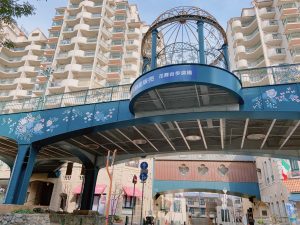 ↑A monument to celebrate the great hit performance “The Rose of Versailles.” ↑A monument honoring the star who played the male role: “Gentleman in top hat and tails” 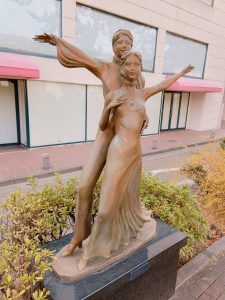 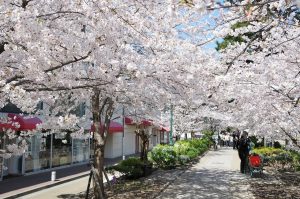 ↑As you walk along the Hana no Michi path, watch out below! Signs depicting some of Tezuka Osamu’s characters are embedded in the floor. 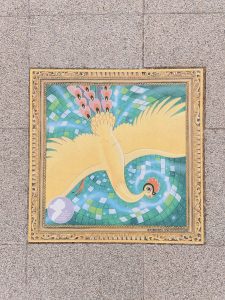 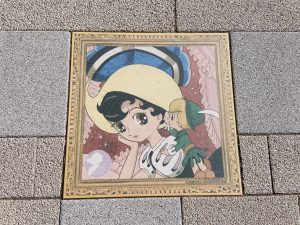 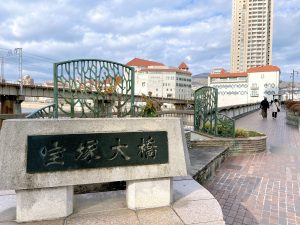 Be sure to take a stroll along the Takarazuka Bridge, which crosses the Muko River on the south side of the Takarazuka Grand Theater, and The Osamu Tezuka Manga Museum. Along the 160m length, flower beds planted with blossoms for every season bloom among sculptures, creating the ambience of a garden bridge. You may walk past students from the Takarazuka Music School or a member of the Takarazuka Revue. 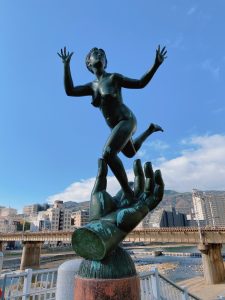 ↑Sculpture “The Hand of Love” 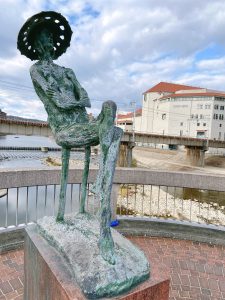 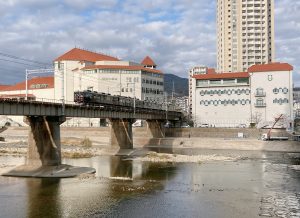 For other attractions in Takarazuka City, visit this site: https://visithanshin.jp/en/area/takarazuka/